Edit
Not to be confused with MINECON Earth.

This page describes a game that has been officially discontinued.
This game has been discontinued due to outdoor restrictions as a result of the COVID-19 pandemic.
Minecraft Earth 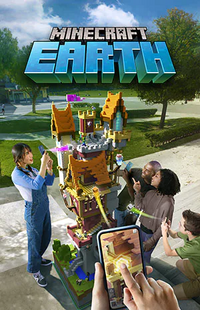 Minecraft Earth was a free-to-play augmented reality (AR) spin-off mobile game developed by Mojang Studios and published by Xbox Game Studios for iOS, iPadOS, and Android. The game was about building structures and collecting materials by traveling to real-life locations. Minecraft Earth was released in closed beta on July 16, 2019, and gradually expanded its available countries over the rest of 2019, being released worldwide on December 11, 2019. The game received its final update, 0.33.0, on January 5, 2021, and is discontinued as of June 30, 2021, due to restrictions on outdoor activities as a result of the COVID-19 pandemic.[8] On July 1, 2021, all players that had a remaining paid balance of Rubies were given Minecoins and a copy of Bedrock Edition in return.[8]

Minecraft Earth was an adaptation of the traditional Minecraft experience to an augmented-reality setting, similarly to Ingress and Pokémon Go.[9] The game itself was built on the Bedrock engine. It featured many unique gameplay aspects and interactions similar to the main game.[9]

The game used Microsoft Azure Spatial Anchors along with OpenStreetMap to power location-based gameplay. The technology synced the position of buildplates in multi-player by referencing objects in the real world, creating a seamless experience.[9][11][12]

It was announced that the Nether and the End were planned for Minecraft Earth in a future update,[13] but these plans were scrapped due to the game being discontinued on June 30, 2021.[8]

In Minecraft Earth, players were allowed to build structures with other players and "place them in the real world at life-size".[12]

In the map view, players were allowed to see their character, which was able to be changed with skins owned from the marketplace or generated using the Character Creator. Scattered around the maps were tappables. If a tappable was within a player's collection range, the player could tap it and collect items. There were multiple types of tappables, including stone, grass, pond, chests, and mobs.

Buildplates were worlds that players used to build on. They were shared remotely for viewing, and worked on by invited players in the same location.[9][11]

Buildplates were 8×8, 16×16 or 32×32 blocks in size, and their build height limit was 221 blocks.[14] From ground level, a buildplate also extended downward in varying depth, depending on the buildplate. The minimum depth before bedrock appeared after digging down was 3 blocks and the buildplate with the maximum recorded depth was 12 blocks[15]

Using the shop, players were allowed to buy new plots using rubies. Plots were also earned via a leveling system.

Buildplates functioned like personal realms and were used anywhere. They ran in the Bedrock Engine, meaning redstone, physics, and other mechanics were identical to Bedrock Edition. Players were allowed to invite friends to build with them locally and then share the world to others via a link.[9][11]

A planned feature for buildplates that was announced but never implemented was the ability to pin buildplates on the map for other players to view publicly.

Buildplates were also allowed to be shared via a link, so players didn't need to be in the same location as the creator to see creations.[9] The links shared were either temporary or never expiring.[9] Mojang Studios claimed to have a 24/7 moderation team, reviewing and looking at reports of inappropriate builds.[9]

Minecraft Earth adventures had their own buildplates, with predefined above-ground and underground structures and hostile mobs. Like user buildplates, an adventure plate was only allowed to be placed somewhere on the ground before interacting with it. Adventure buildplates weren't able to be saved or moved by a player although multiple players were allowed to interact with the same adventure at the same time.

Similar to advancements in Java Edition and achievements in Bedrock Edition, challenges were tasks given to player to guide the player. Unlike advancements, there were 3 types of challenges: Daily, Seasonal, and Tappable challenges. These challenges involved individual tasks; the player obtained rubies, experience, and credit after completing. For example, if player's task is to collect 6 ferns, and another challenge is to collect 4 ferns, and the player gets 2 ferns, it would apply to both tasks.

The game had full microtransactions. The in game currency was rubies, which was not to be confused with Minecoins.[9]

Minecoins were also used as a secondary currency in Minecraft Earth, for purchasing skins and clothing.

In 0.33.0, the final update to Minecraft Earth, all microtransactions had been removed in preparation for the game's shutting down on June 30, 2021.[8]

During Microsoft Build 2015, Microsoft's HoloLens team unveiled an augmented reality version of Minecraft.[18] On May 6, 2019, Microsoft released a video on YouTube, where some features from Minecraft Earth were shown.[19] On May 8, 2019, a trailer was released, showing some AR mods in Minecraft Earth. On Minecraft's 10th anniversary (May 17, 2019), Minecraft Earth was officially announced.

The closed beta for Minecraft Earth was launched for AR-compatible devices running iOS and iPadOS in the cities listed below.

The early access of Minecraft Earth was launched for everyone to download in the App Store and Google Play in the countries listed below.[24]

On January 5, 2021, Mojang Studios released the final update to Minecraft Earth, 0.33.0, and announced that the game's servers would be taken offline after June 30, 2021, citing the current global situation. On that day, the game was removed from the respective app stores.[8] Players who open the app after that date are greeted with this message, which includes a link to information about the shutdown:

For Returning Players before discontinuation, received an exclusive Character creator “Hero” outfit set. If a returning player had a remaining paid ruby balance before the start of the shutdown would receive a free copy of Minecraft: Bedrock Edition.

According to the FAQ page: