Edit
This article is about the hostile mob in Minecraft Dungeons. For the final boss of the Creeping Winter DLC, see MCD:Wretched Wraith. For the tower variant, see MCD:Tower Wraith.

This article is a work in progress.
Please help in the expansion or creation of this article by expanding or improving it. The talk page may contain suggestions.
Note:
Wraith 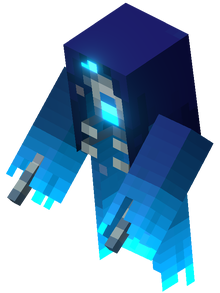 A wraith is an undead hostile ghost-like mob found in certain missions in Minecraft Dungeons. The wretched wraith is another type of wraith that is found in the Creeping Winter DLC.

Wraiths appear to be an undead ghost-like mob that resembles a skeleton but are composed of a skull and a small rib cage. It wears a blue hood over itself that glows and has two small hands.

Wraiths are immune to their own blue flames and enchanted fire from other mobs.

A wraith attacks its target by creating a 3×3 area of scorching blue flames on the ground under the hero. The flames burn the hero and cause damage over time. Attacking or stunning a wraith while it is trying to attack cancels the attack. The wraith can rarely summon a cross pattern of fire.

A wraith can teleport away from targets that get too close. Attacking or stunning a wraith while it is teleporting cancels the teleport, but the wraith remains invisible for a few seconds.

In Minecraft Dungeons: Arcade, a wraith can breathe fire when a hero is near it.

The ancient terror is the ancient variant of the wraith encountered during Ancient Hunts with the minimum offering of the following runes:

The ancient resides within an Underhalls-themed arena and possesses, at minimum, the following enchantments:

Upon defeating the ancient terror, a gilded variant of the following items drop as a reward: