This page would benefit from the addition of isometric renders.
Please remove this notice once you've added suitable isometric renders to the article.
The specific instructions are: Another render of the in-game Redstone Sentry
Woodland Mansion 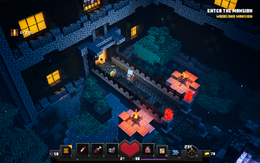 The woodland mansion is a secret mission in Minecraft Dungeons that can only be found by starting an Ancient Hunt. This mission includes depending on situation one to six Evokers. This is the only location where Charged Creepers can naturally be found which are spawned in an ambush at the end of the mission. It appears to take place in a similar area to the Creeper Woods based on the lighting and surrounding vegetation.

The woodland mansion in Minecraft Dungeons mostly appears similar to its vanilla counterpart, but it has some differences. For example, it does not have as many different room types. The carpets do not have white outlines. The torches are in the center of the crosses, instead of in the columns. The outside windows have three by three glass panes, while the inside windows have four by two. There are only crosses of four dark oak logs, in the mansions of the base game, that type of crosses only exists on the first floor, the other crosses are composed by eight Dark Oak Logs. It also has Redstone Sentries in the walls at certain points. Sometimes, a portrait of the Arch-Illager can be found near the entrance. There is an Obsidian chest that rarely spawns behind a bookshelf next to a pedestal with a key on it.

The woodland mansion mission is relatively simple, but does have some complications. One of these are dispenser traps. There are also several rooms containing a table similar to a secret scroll, but contain redstone crystals. Several of these tables trigger ambushes when the redstone is taken. There are several other devices that can be used to shut down redstone walls that obscured several chests and emerald pots. After that, the hero can use a blue diamond key golem to unlock a door to the roof of the mansion. Once there, they must face an arena battle with charged creepers and one or two evokers, after which the hero must activate the lightning rods to stop the charged creepers from spawning. When a lightning rod is deactivated, lightning strikes, electrifying the nearby water, making stepping in puddles deal damage.