This page would benefit from the addition of isometric renders.
Please remove this notice once you've added suitable isometric renders to the article.
The specific instructions are: Witch with health potion
Witch 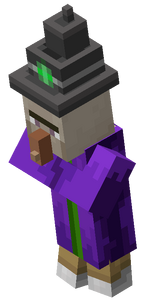 Witches are hostile mobs that attack players by throwing potions which create clouds of damaging gas.

The Witch's appearance is similar to its default counterpart in the base game, with the exception that they are in a hunched position when approaching players, and its hat is straight upwards, unlike its Java or Bedrock counterpart. It has a large wart on its nose.

Witches concoct and throw foul brews to attack players and pets. On impact they explode, creating noxious potion clouds. The potion attack has a small circular radius, and disappears after a short time, all the while causing constant damage to anyone inside its radius. These brews heavily resemble the Shadow Brew potion. Witches attack from a short distance away and retreat back once they have done so. The player can also shoot the potions mid-air to make them explode sooner, but it still can damage the player and pets.

When injured, they can heal themselves by drinking health potions, but they can do this only once. [verify] 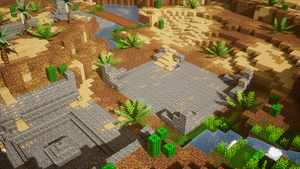 The arena where the Pestilent Conjurer is summoned and battled at.

The Pestilent Conjurer is the ancient variant of the Witch encountered during Ancient Hunts with the minimum offering of . The ancient resides within a Cacti Canyon-themed arena and possesses, at minimum, the following enchantments:

Upon defeating the Pestilent Conjurer, a gilded variant of the Spear, Glaive, Heavy Crossbow, Scatter Crossbow or any of their uniques will drop as a reward.

Issues relating to "Witch" are maintained on the bug tracker. Report issues there.