It has been suggested that this page be merged with MCD:Woodland Prison#Wisp. [discuss]
If this merge affects many pages or may potentially be controversial, do not merge the page until a consensus is reached.

This article is a work in progress.
Please help in the expansion or creation of this article by expanding or improving it. The talk page may contain suggestions.
Note:
Wisp 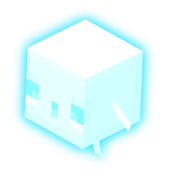 A wisp, also known as a ghost, is a passive mob-like entity found only within the Woodland Prison Ancient Hunt.

A wisp is a small ghostly mob that resembles a baby ghast. However, there are differences. While a baby ghast has a translucent body, a wisp's top texture resembles the blue block within beacons found within the base game, while the rest of its body has a light blue color. A wisp's eyes and mouth have the darkest shade of blue. The eyes also appear to bleed over the edge of the face and onto the side of the texture. There is a small white line texture below the eyes and the mouth, while there is also a subtle blue line above both of the eyes, lighter than the eyes and just barely slightly darker than the rest of the face. A wisp appears to have a white 2D texture for it's arms, and a light blue 2D texture for its legs. A wisp appears to be floating due to its visible arm and leg appearing as if it were moving back and pointing down. A wisp's eyes and mouth appear to be wide open.

A wisp, when found, circles around a wall with a interactable brick. When clicked, the wall opens up and reveals a hidden room that occasionally contains 6 emerald pots, a common chest, or an obsidian chest. When nearby, it emits a ghost like noise and starts to disappear when approached.