Edit
This article is about the artifact. For other uses, see Horn (disambiguation).
Wind Horn 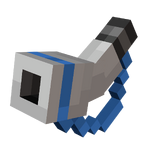 The Wind Horn is an artifact in Minecraft Dungeons. It can be used to push mobs away in a certain distance.

When used, it pushes away enemies up a certain distance and slows them briefly. This artifact can also be used to push mobs away in the middle of healing to avoid getting constant damage. Wind Horn can be quite useful in certain locations where mobs can be pushed off of the map, such as the Soggy Swamp or the Crimson Forest.

Cooldown, 10 Seconds, does not appear to change with power level.