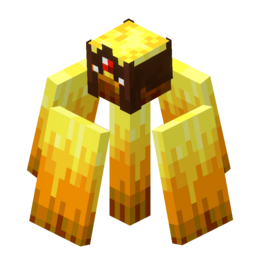 A wildfire is a powerful mob that was added in the Luminous Night seasonal adventure and appears in the Flames of the Nether DLC. It is a more powerful variant of the blaze, even capable of summoning them in combat.

A wildfire is a large mob, similar in appearance to a blaze albeit bigger and somewhat tougher. It possesses four large shields which float around it, which act as protection. These four shields of the wildfire happens to be its own model and entity that is separate from the wildfire. Wildfires also blaze rod like pillar under its blaze-like head. What makes its head different from blazes, however, is the helmet that it wears which is fitted with a small red gem.

Wildfires act as shielded mobs similar to royal guards, skeleton vanguards, and tower guards, where the mob's shield must be destroyed first. However, unlike most shielded mobs, wildfires have four shields, all of which must be destroyed before inflicting damage, and the shields can also take multiple hits before breaking. When wildfires are low on health, they will retreat to seek out a fire source to heal itself like blazes, but can also regenerate damaged and destroyed shields.

Wildfires will occasionally shoot a barrage of shield debris instead of fireballs at a hero.

Wildfires will slam the ground if a target gets too close, sending out a small shockwave, knocking back both heroes and mobs.

Wildfires are also capable of summoning one or two blazes to assist it.