This page describes content that is a part of the Flames of the Nether DLC.
Warped Forest

The Warped Forest is a location in the Minecraft Dungeons DLC Flames of the Nether. It can be unlocked from completing the Nether Wastes. This mission generates a scroll that, if found, grants access to the Crimson Forest mission.

This location is in the warped forest biome in the based game where blue nethershrooms or warped fungi grow wildly. The ground and the environment is dark green and it looks quite lush with some twisting vines. Lava falls appear everywhere in this level and the forest is just above a huge and dangerous lava sea. There're some blackstone walls throughout this mission which are made by piglins maybe for defense. The hero has to walk through the dark and creepy woods with Endermen in order to find the nether portal at the end of it.

Enchanted mobs may excessively spawn at the beginning, causing possible lag and crashes on low end devices, and making it very difficult to progress further without powerful gear. 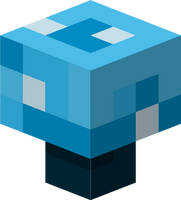 A blue nethershroom, also known in the files as the Poison Fungus is a type of poisonous entity similar to the warped fungus in the base game albeit smaller and different colored, found in the Other Dimensions in Minecraft Dungeons, more exactly, the Warped Forest.

The blue nethershroom is supposed to replicate the warped fungus from the Minecraft biome, Warped Forest. It has a medium blue color, with spots of varying shades of blue, dotted around the mushroom. It is rather small. The blue nethershroom is rather different in appearance then its base game counterpart, with the warped fungus having a turquoise color, with orange spots.

If an entity walks on a blue nethershroom, they explode into blue poison clouds. While it can be found as a terrain feature, they were weaponized by the fungus throwers and their zombified variants. 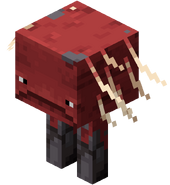 A strider is a mob-like feature that can be heard in the warped forest.

Strider sounds can be heard throughout the mission.