Edit
For the hostile mob in Minecraft, see Vindicator.
Vindicator 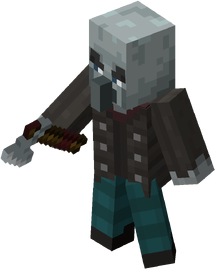 A vindicator is a common illager and hostile mob equipped with an axe. It is found on most levels in Minecraft Dungeons.

Before the Arch-Illager appeared, the Vindicators were the basic illager soldiers, guarding the woodland mansions and participating in raids, after Archie keeps the Orb of Dominance, the vindicators and pillagers led by the evokers Thord and Walda, joined the Arch-Illager's army, patrolling now the Highblock Keep, the Fiery Forge, Redstone Mines, and participating in raids, now with the help of redstone golems and the Redstone Monstrosity. After the heroes defeat the Arch-Illager, they traveled to other areas of the mainland and even other dimensions, where vindicators can also be found.

The vindicator's appearance in Minecraft Dungeons is similar to its default counterpart, but with a slightly brightened texture, and their arms are never seen together, unlike in the base game.

If it sees a hero, it charges and attacks with an axe. Although vindicators have high movement speed, they have more delay than other melee mobs when attacking.

A vindicator attacks the hero on sight. Their attack speed is slightly slower than zombies but deal more damage and are tougher.

Vindicators lock onto the hero if they run more than 15 blocks away.

If a vindicator is standing in a taunt circle and getting hurt, they become faster and deal more damage to the hero.[more information needed]