This article is a work in progress.
Please help in the expansion or creation of this article by expanding or improving it. The talk page may contain suggestions.
Note:
Vexing Chant 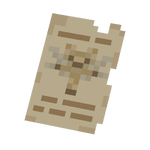 A vexing chant is an artifact in Minecraft Dungeons added in the Echoing Void DLC that summons three Guardian Vexes upon use that attack any nearby mobs with a Mace. Like most summonable mobs, they disappear after a short while.

A vexing chant can summon 3 Guardian Vexes that can aid the hero in defeating mobs, like most summonable mobs.

A Guardian Vex is a ghostlike mob that can be summoned with the Vexing Chant. It was added in the Echoing Void DLC.

Three Guardian Vexes can be summoned by using the Vexing Chant but they disappear after a while.

The Guardian Vex is a very small mob, around the size of a Vex and similar in appearance to it, with the exception that its skin is a light pinkish color, has large yellow eyes, small ears, and smaller and thinner wings. They are also seen carrying a Mace which they use to smash enemies.

Being a summonable mob, they attack any mobs near the hero, where they use their Mace to smash them into the ground.