This page describes content that is a part of the Echoing Void DLC.
Vengeful Heart of Ender 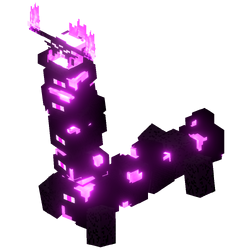 After being defeated by the heroes atop the Obsidian Pinnacle, the Heart of Ender was seemingly defeated. However, after the heroes left with Archie, the shattered shards are shown to be putting themselves back together, but without the four shards that landed among the island realms, it would never be able to reform itself completely.

Anger…pain…suffering…Through the heart of ender’s fractured, but shared conscience, the remaining chunk of the orb felt the destruction of the other four shards. Somehow, it remained hidden from its enemies, maybe for the best. It managed to outlive the other shards of its being, but it was only a matter of time before they came for it. The sound…the sound of stone being moved. Yes, they received its message. Light shines in as two endermen moved aside the bricks that made up the ruins of the obsidian pinnacle. As one enderman grabbed the chunk, the orb felt it’s time had come. To the beginning…the endermen teleported to the stronghold. The beginning from which it came, the beginning from which it lived. To the beginning…the shard carrying enderman approached the end portal. After the two head through the portal, several endermites and six endersent emerge from the portal, determined to protect the pathway to their master. The endersent in particular took six eyes of ender, to de-activate the portal so that no one could follow the remnant of the orb. To the beginning…the time had now come to go to the end.

Within the end, the orb remnant reformed itself to the best of its ability into an imperfect form due to the mysterious energies of the End. This form is known as the imperfect heart of ender. While the orb of dominance tried perfecting this broken form, the heroes realized the existence of the imperfect heart of ender, and the End in general. They needed eyes of ender to enter, and unfortunately for them the eyes merged with endersent that were scattered throughout the Overworld. After the eyes were defeated and gathered, they traveled to the Stronghold and activated the End Portal. They then traveled through the portal and into an entirely new dimension. They battled their way through the End Wilds and traveled through a gateway into a Broken Citadel. They fought through the the citadel in hopes of reaching a shrine, where the imperfect heart of ender is resting.

Finally, when the heroes reached the end shrine, the imperfect heart of ender undergoes a transformation before their eyes. This transformation resulted in the heart of ender's final and perfect form, the Vengeful Heart of Ender, the strongest and most monstrous monster they ever fought. Filled with the rage of being humiliated at the Obsidian Pinnacle and the anguish of the pain it felt when the corruptive shards of the Island Realms were destroyed, the Vengeful Heart of Ender attempts to kill the heroes at its very resting point in hopes of being rid of the heroes, and the very world it wished to control. The heroes manage to defeat it, and the last remains of the orb of dominance are finally destroyed. The heroes then return to the overworld through an exit portal and celebrate the end of the orb's tyranny.

The Vengeful Heart of Ender is much larger and more monstrous than the Heart of Ender, now possessing eyes throughout most of its body. It has four small legs, a long neck, and a head possessing two long horns. The tips of the horns are lit with purple flames, along with its jaw. It also possesses an extra eye and jagged teeth.

Upon encountering the imperfect heart of ender at its shrine, it opens and enters a large portal and then emerges in its perfect form. Upon its death, the eyes on its body shoot lasers uncontrollably, slicing its body apart in the process, losing its power. After a few seconds, it topples over and slowly disintegrates into dust with its ashes blowing away into the obscurity of the End to be lost forever. It has eight behaviors that are used in a random order:

The Vengeful Heart of Ender quickly charges at the hero, dealing constant damage if they are in its way.

The Vengeful Heart of Ender spins its body segments around, similar to Heart of Ender's behavior, spewing out several projectiles which fall to the ground, lingering for a moment. Instead of leaving purple flames behind, the projectiles will explode in a large radius. This attack also flings void slugs at random spots nearby, which after a while explode, turning into an area that can cause the Void Touched effect. This void slug disappears afterward.

The Vengeful Heart of Ender shakes, and several endermites fall off of it. Some of these endermites are enchanted with Sharpness, giving them 33% more health than naturally spawning ones.

The Vengeful Heart of Ender can also shake and cause any endermites that are still alive to be sucked back to the vengeful heart of ender, causing the boss to be healed by 1/128 per endermite.

The Vengeful Heart of Ender becomes invincible and invulnerable and goes to the center of the arena, covering it in a void shroud, then does one of two attacks:

It begins sucking heroes toward it and, after a few seconds, explodes, dealing massive damage. This attack is performed three times in a row, and can only be used twice in a single battle. While this attack is active, additional endermites are constantly summoned by the boss, but they are not effected by the sucking or explosion.

Several void crystals erupt from around the edges of the arena, and the vengeful heart of ender begins shooting many energy projectiles off of its body segments in circle formations. Each deals energy projectiles heavy damage. The void crystals reflects any oncoming projectiles that hits them in a random direction, making it harder to avoid and can last more then ten seconds. The lower amount of health points it has, the more projectiles it shoots, making it even more harder to avoid and is the boss's most powerful attack.

This page would benefit from the addition of more sounds.
Please remove this notice once you've added suitable sounds to the article.
The specific instructions are:
Imperfect Heart of Ender

Before entering the end shrine, the imperfect heart of ender appears as a long black centipede-like creature with a segmented body, a pink energy connects each of them. It has six small legs, several pink spots all around its body and has a small two-horned head with two pink eyes and a pink mouth.

The imperfect heart of ender stalks the hero while journeying to the end shrine. In the end wilds and broken citadel missions, it can be seen crawling around, usually setting off ambush events. In cutscenes, it is also shown to be able to create portals to transport it to places quickly.