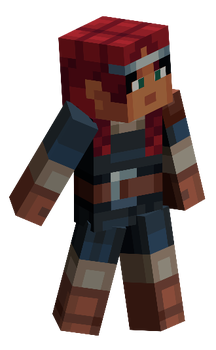 Valorie appears in The Rise of the Arch-Illager, nicknamed "Red" (hence her red hair) by Karl.

Valorie was shown, along with three other characters, Hex, Adriene, and Hal, during the trailer at MINECON Earth 2018. Her name was not announced at the time. In the trailer, she nods to Adriene, the hero to her left after the scene with the Illagers. She is the last of the four to equip armor and weapons. When she does, she wears the Guard's Armor, as well as a sword.

During the gameplay reveal of Minecraft Dungeons for E3 2019, Valorie was shown as the first character, running towards a Skeleton which she later kills it by bringing it close with a Fishing Rod and then using her sword. She then proceeds to kill an upcoming Dungeons-exclusive illager known as the Armored Vindicator and a Zombie with a bow. She then runs into an area full of Cobwebs and Spiders to grab a piece of armor. After that, she activates a door to a secret area, which she then enters. She collects a Great Hammer while there, swapping it with her sword. Then, in the Desert Temple area, she kills two husks with the hammer. In another room, she watches as part of a floor slides back to reveal a decorated chest. She then kills several zombies in another room with the hammer. She then moves through a corridor and pulls up a virtual map of the area. Later, in yet another room, she equips a Corrupted Beacon and kills three Vindicators and three Skeletons. Eventually, she is killed off-screen in what we now know to be the Fiery Forge, but is shown being revived by another hero. Two other heroes rush to meet them. There is text above her head reading "MCDungeoneer", although this is more likely to be an example hero name rather than Valorie's real name. She and her three companions walk through a marsh-like area, with two of them (including Valorie) crossing a bridge and the others going around. She then collects a Key Golem and uses it to unlock a door. Later on, she has shown to have better armor and an Iron Golem pet, attacking different mobs. She equips the Tasty Bone item to spawn a Wolf pet as well, and they fight several mobs. After several other battle scenes, including one with hundreds of mobs and a Redstone Monstrosity, the gameplay reveal ends with the Arch-Illager wreaking havoc with the platform names.

Valorie also appears in various other promotional material for Minecraft Dungeons. This includes much of the posters and videos for the game and three of it's DLCs, Jungle Awakens, Creeping Winter and Howling Peaks.

She appears in the LEGO Minecraft set 21163 The Redstone Battle, along with Hex, Adriene and Hal.

She also appears in Minecraft: Builders & Biomes as a playable character. In general, she seems to be wearing a blue vest over a white shirt and pants. She has brown boots and gloves and and a metal head band. She has green eyes and red braided hair.

In the Official Minecraft Dungeons poster, she has freckles. She also has long eyelashes.

In a Twitter video, Valorie goes around the camp, buying various items from the camp merchants, such as the venom glaive from the luxury merchant, mercenary armor from the village merchant, a crossbow from the piglin merchant, and some scatter mines from the mystery merchant.[1]