Since the beginning of Minecraft Dungeons' development, there have been a number of features added to the game that have no actual use in-game. Some of these features were removed in an update, or were leftover from removed features, only mentioned in trailers, or simply placeholders for new features. The features are as follows in alphabetical order:

The Ender Armor, also known as Curious Armor, is an unused unique variant of the Guard's Armor that had the unique ability to have a 5% chance to teleport players when they took damage. It is unknown whether the teleportation ability is what made it unused, but the teleport function cannot be obtained even if the player manages to get curious armor using hacks. This armor, referred to as Ender Armor, set can be obtained through a card in Minecraft Dungeons Arcade however.

The Fox is an unimplemented passive mob that appeared briefly in the Minecraft Dungeons Cross-Platform Play Trailer. It is a regular variant of the already-existing Arctic Fox pet that is available with the Creeping Winter DLC or with the Hero Pass. This mob makes an appearance in the spin-off game Minecraft Dungeons Arcade as a summonable pet.

The Mage is an unimplemented spellcaster illager that was planned for Minecraft Dungeons, but it was scrapped. It has been in the files since the game's release (1.1.1.0), but was removed for no apparent reason in the 1.2.0.0 patch. This mob appears in Minecraft Dungeons Arcade however.

The Obsidian Monstrosity is an unimplemented boss mob that has a statue found in the Obsidian Pinnacle. It is an obsidian variant of the redstone monstrosity. It can be found under construction in one of the variants of the part of the level that generates the second main redstone golem fight. The Obsidian Monstrosity is its name in the game files, as it is not referenced in the base game. In Minecraft Dungeons Arcade however, it is now a living entity and an exclusive boss there.

Barrier is an unused enchantment that was planned for the Jungle Awakens DLC, but was later added in the Echoing Void DLC as a built in enchantment for the Sturdy shulker armour.

Bow's Boon is an unused enchantment in Minecraft Dungeons meant to be for ranged weapons. Any ranged weapon enchanted with Bow's Boon grants the player and their allies a damage boost for every arrow that passes through them, due to it being unused, the tiers are unknown.

Knockback is an enchantment that would behave like regular knockback would. Every once in a while, enemies get knocked back after a melee attack. It was one of the rarest enchantments in the game before it became unobtainable.

The End Rogue is an unused hero in Minecraft Dungeons that was believed to have been obtainable within the Echoing Void DLC. Much like the Nether Warrior, it was rendered unused, probably due to both being made quite early, and then scrapped for the new, more updated heroes.

The Nether Warrior is an unused hero in Minecraft Dungeons that was believed to have been obtainable within the Flames of the Nether DLC. Much like the End Rogue, It was rendered unused, probably due to both being made quite early, and then scrapped for the new, more updated heroes.

Diamond Dust is an unused item that would have been bought and used by the mason to upgrade the power level by one of a piece of gear (to a maximum of level 112).

The Monkey Motivator is an unused unique variant of the pickaxe that was planned for the Jungle Awakens DLC that would have featured a banana on the end of a stick. It can be obtained with hacks, but will cause the game to crash whenever its clicked on.

The Totem of Soul Protection, known internally as the Totem of Spirit, is an unused artifact that would have the ability to fully revive all players in a square area upon death, similar to the base game's Totem of Undying. It was actually showcased in the Minecraft Dungeons Diaries episode Meet The Team, where it would produce a aqua colored square area, but hasn't been mentioned since. The artifact's death-cheating function returned to the game in the form of new enchantments called Life Boost and Death Barter, released in the Howling Peaks patch. It can be obtained using hacks with a rare chance of the game not crashing and does function fully as seen in this video. 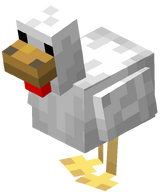 The Cat is an unused passive mob that appears within the Minecraft Dungeons Cross-Platform Play Trailer where two cats are seen near Dani, with one on her seat behind her and one beside her, and a third seen by the fish tank looking at the fish.

The Cod is an unused passive mobs in Minecraft Dungeons. The mob makes an appearance in the Minecraft Dungeons Cross-Platform Play Trailer, where one is seen swimming within Dani’s tank. The mob also appears alongside the Salmon in the background of the official poster for the Hidden Depths DLC, despite not actually being in the DLC itself.

The Enchantsmith is an unused NPC mob in Minecraft Dungeons that was added in the game files in the Echoing Void patch, but was never added into the game.

The Mason is an unimplemented merchant that would have been able to upgrade the players gear to their current power level using diamond dust that could be bought for 1000 emeralds. Its item-upgrading functionality was re-added in the Creeping Winter update with the Blacksmith, minus the diamond dust.

The Quest Giver is an unimplemented merchant that would have been able to give quests to the player similar to the mission map in the camp. It was first added during the Creeping Winter patch along with the other new camp merchants, with it potentially being one of them, but it was never implemented. Its appearance resembles the savanna villagers from regular Minecraft with it having sandals and red and green clothes. It also has a bandanna over its eyes and wears a crown.

The Salmon is an unused mob in Minecraft Dungeons. The mob makes an appearance in the Minecraft Dungeons Cross-Platform Play Trailer, where one is seen swimming within Dani’s tank. The mob also appears alongside the Cod in the background of the official poster for the Hidden Depths DLC, despite not actually being in the DLC itself.

The Web Spider is an unimplemented mob in Minecraft Dungeons that was added in the game files in the Dungeons Beta, but was removed in 1.7.3.0. It is a variant of the spider that could be featured in a future DLC or update. The only proof of its existence so far are a few textures and models in the game files. It is only inferred that the web spider has red eyes, as the textures for other spiders also lack eyes. The web spider is very similar in appearance to the spider. It’s main similarity is that it has red eyes. The difference is that it has a greenish tint on its texture. In addition to this, looking closely, there is also a very subtle purple tint in the middle of the side of each leg. It also seems to use the old spider texture prior to 1.14 just with a green tint.

Heals Allies is an unused powerful armor enchantment that would heal nearby allies by how much damage the player takes. This enchantment is, however, used on enchanted mobs.

Regeneration is an enchantment that would allow the player to passively regenerate health after 10 seconds of not taking any damage. This enchantment can still be applied to mobs however.

Shielding is an enchantment that would give an aura that gives damage resistance to the player and any nearby allies. In 1.7.2.0, mobs were given the ability to spawn or be enchanted with Shielding. They removed this from the player's artillery because it was likely to overshadow the protection enchant.

Withering is an enchantment that would give the user the ability to inflict Wither upon hit. The enchantment can only generate on a Stone Sword and the Red Snake wielded by Wither Skeletons and Wither Skeleton Archers respectively)

The Icy Creeper has an unused face texture that uses an icy overlay. This could have been what the Icy Creeper would have originally looked like, as they said it was changed back to green to fit with the regular Creeper and to not affect the creeper as an icon.