This article needs cleanup to comply with the style guide. [discuss]
Please help improve this page. The talk page may contain suggestions.
Underhalls 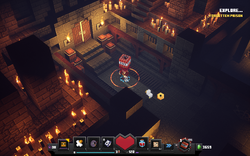 The Underhalls is a secret location in Minecraft Dungeons. It can be unlocked in the Highblock Halls.

The Underhalls is located in the regal Highblock Keep. It's a dusty cellar full of forgotten things. Parts of the cellar look like jails, with chains hanging from the ceiling. Heroes need to fight their way through hordes of mobs, collecting loot while leaving. A Key Golem is needed to access the main area and escape.

The Underhalls is the cellar area of the Highblock Halls. It contains various chests and dark hallways, as well as various cells and other ruined structures left to be forgotten. Booby traps can be found here along with many ambush areas. It has a similar dark appearance to the Creepy Crypt, but the difference that the halls were used possibly for torture or inprisonment of villagers before being forgotten.