This article is a work in progress.
Please help in the expansion or creation of this article by expanding or improving it. The talk page may contain suggestions.
Trickbow 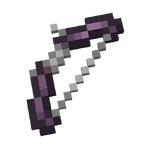 The Trickbow is a ranged weapon in Minecraft Dungeons. Its unique variants are The Green Menace,theThe Pink Scoundrel and theSugar Rush

The Trickbow has low power, low speed and moderate ammo. The quiver starts with 66 arrows.

Damage caused by the arrows can be increased with enchantments, the Strength buff, and certain armors that have ranged damage increases, such as the Hunter's Armor.

Good enchants on this weapon would be chance-related enchants, like Enigma Resonator, Poison Cloud and Radiance Shot to make use of it's ability to ricochet off targets.