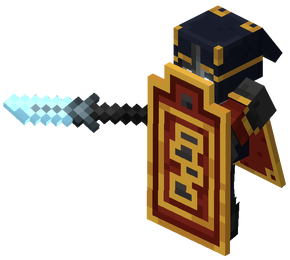 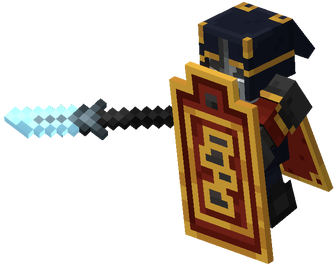 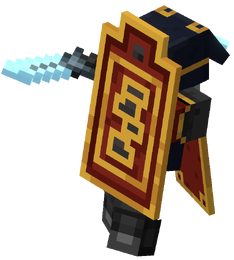 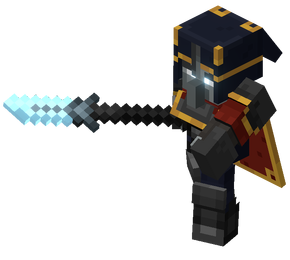 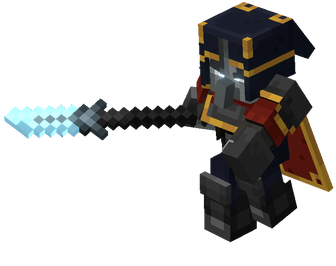 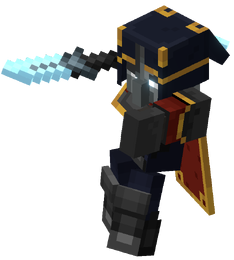 A tower guard is a heavily-armored tower keeper royal guard variant that can be found within the cloudy climb seasonal adventure of Minecraft Dungeons.

Tower guards are illagers similar in appearance to royal guards with the difference of them being exclusive to the tower and having unique armor and weapons. Firstly, they wear a unique hood with yellow outlines in the back, they also wear red underclothing under their armor, and lastly, they wear capes and don a unique shield. The same pattern on their shield is seen on their capes. Their eyes are also seen glowing a bright blue.

Tower guards have strength that is equivalent of the Arch-Illager’s royal guards, capable of overwhelming the hero with both damage and numbers, they also like to circle the hero blocking them.

Tower guards are usually protected by their heavy armor, with their shield and glaive. The shield can deflect all ranged attacks unlike shields of royal guards which can be broken with ranged attacks, so it must be destroyed first, so the hero can damage it. Tower guards are slower than most mobs, but extremely strong, capable of dealing heavy damage to the hero. Their health pool is larger than the royal guards and they do more melee damage. They still can be stunned by normal attacks.

They have three behaviors:

Tower guards are capable of charging at the hero if they are within range.

Tower guards are capable of swinging their glaive at the hero, dealing heavy damage.

Tower guards are capable of locking onto heroes that run fifteen blocks away from them, chasing them. 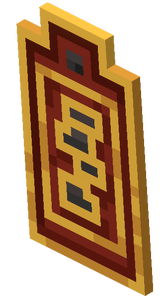 A tower guard shield is a royal guard shield variant that can be found exclusively equipped by tower guards within the cloudy climb seasonal adventure of Minecraft Dungeons.

A tower guard spear is a spear variant that can be found exclusively equipped by tower guards within the cloudy climb seasonal adventure of Minecraft Dungeons.

Tower guard spears are long dark gray spears that resemble a glaive. The blade on the edge of the spear is a diamond like color however it is currently unknown if the blade is actually made of diamond. This diamond color also appears on the other edge of the spear in the form of two small pieces that decorate the weapon.

Issues relating to "Tower Guard" are maintained on the bug tracker. Report issues there.