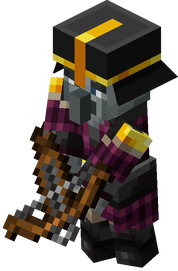 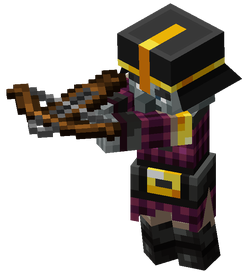 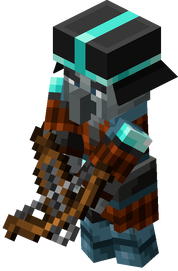 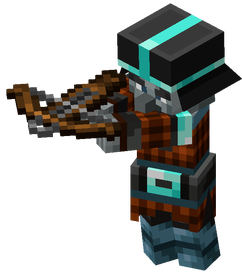 Tough pillagers always spawn with the Piercing enchantment on their crossbow.

Tough pillagers sometimes move away from enemies if they get too close to them.

Tough pillagers are armed with crossbows and are usually slow-moving, preferring to shoot the hero from a distance. However, they deal great piercing damage with a single shot.

The solemn giant is an ancient gold tough pillager that can be encountered during ancient hunts with the minimum offering of the following runes:

This ancient resides within a Obsidian Pinnacle-themed arena and possesses, at minimum, the following enchantments:

Upon defeating the solemn giant, a gilded variant of the following items drops as a reward: 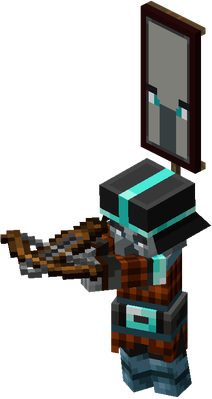 A pillager raid captain is a powerful diamond tough pillager variant that can be found within the various missions of Minecraft Dungeons.

Pillager raid captains look exactly like diamond tough pillagers that carry a raid captain banner on its back.

When defeated, they drop one of two banners, either threat or mystery. Threat portrays the Bad Omen icon and Mystery portrays a skull, and when picked up, the game is enhanced with modifiers (e.g. enemies have boost). At the end of the level, an extra item is given in addition to the artifact chest. Also, the chance for it to be unique exponentially increases for every pillager raid captain defeated after the first.

If all six pillager raid captains have been defeated inside of a daily trial on Apocalypse + 25, the highest power level items in the game can be collected from the raid captain chest.

Issues relating to "Tough Pillager" are maintained on the bug tracker. Report issues there.