This article is a work in progress.
Please help in the expansion or creation of this article by expanding or improving it. The talk page may contain suggestions.
Torment Quiver 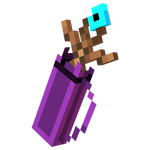 The Torment Quiver is an item in Minecraft Dungeons that gives slow arrows that knocks back mobs and passes through walls.

It can also be randomly purchased from the Village Merchant.

The Torment Quiver has a 6 second cooldown, +1 soul gathering, and requires 10 souls to activate.

Upon activation the player's quiver is swapped out for three torment arrows, which remain until they are used and cannot be refilled unless all of them are fired and the artifact is used again.

The speed of the torment arrows can be increased with certain enchantments and ranged weapons. Firing the arrows after charging them with a bow sends the arrow flying much faster. The arrow is also capable of hitting the same enemy multiple times. Some bosses, like the Enderman in Soggy Swamp, can be knocked into the instant-kill water if punch is enchanted on the bow used.

Equipment that increases Ranged Damage, such as Hunter's Armor, and Frost Bite affect the amount of damage dealt.

Certain effects from ranged weapons and enchantments are still applied to the Torment Arrow, these include:

The damage range depends on the item's power.