This Minecraft Dungeons article is a stub.
You can help by expanding it.
TNT 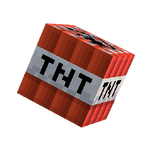 The TNT is a consumable in Minecraft Dungeons.

Appearance of TNT is the same as TNT from the original game.

TNT, like other consumables, may randomly be dropped by mobs when killed. A hero can then pick it up. Three TNT may be carried at a time.

When picked up, TNT remains above the hero’s head until they either are killed or throw all TNT they have by using the shoot bow button. Once it lands after being thrown, it starts charging; during this time, a circle appears around it, alerting the heroes of its massive 8 block radius. Once it finishes charging, it explodes, dealing massive damage (about 2 times more then the Creeper's explosion) to any entity in its range, including heroes and summons.