This article is a work in progress.
Please help in the expansion or creation of this article by expanding or improving it. The talk page may contain suggestions.
Swiftness Potion 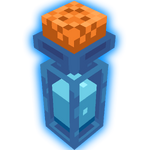 A Swiftness potion is a potion in Minecraft Dungeons used to boost the player's speed.

The Swiftness potion is mainly obtained by defeating mobs, and opening chests.

The common armor enchantment Surprise Gift and the common weapon enchantment Looting also have a chance to create the potion, as well as other consumables.