This page describes content that is a part of the Flames of the Nether DLC.
Strider Warrior 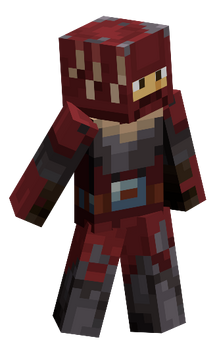 The Strider Warrior is a skin in Minecraft Dungeons obtainable with the Flames of the Nether DLC. It is likely based off of the unused Nether Warrior skin.

The Strider Warrior is modeled after the base game Strider.[1] It has a helmet which appears similar to the mob's head itself. Its torso appears to have basalt around the shirt's collar, and a small belt. The legs and arms are very similar to the shirt.