This page describes content that is a part of the Howling Peaks DLC.
Squall Golem 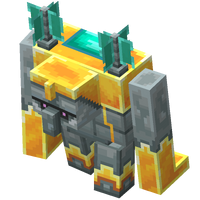 A squall golem is a hostile golem that can be found within the howling peaks DLC of Minecraft Dungeons.

Squall golems are known as the most ancient and mysterious guardians of the Gale Sanctum. They are composed of stone, gold, and an unknown jade-colored block with two swirl patterns upon their back. Their head is wide with their upper forehead being composed of gold, and the middle of their head bearing a gold stud. Their body possesses intricate lines and patterns, including two gold lines on their side. Their legs are grey with golden knees while their hands are gold, possibly to maintain balance. The are two gray poles on their golden back, each having four jade-colored banners.

Squall golems do not spawn during ancient hunts. They also cannot spawn with enchantments, although they can be enchanted by enchanters.

Squall golems cannot be stunned by normal attacks, except shock powder and any weapon with the stunning enchantment.

Squall golems are unable to pick up key golems.

Squall golems are not hostile at first; they start off unmoving on the ground. When inactive, they cannot be attacked.

Squall golems activate if a wind is directed toward one via a nearby resonance crystal.

Squall golems charge towards the hero with quick melee attacks, which causes a shockwave that knocks the hero back and deals heavy damage.