This page would benefit from the addition of isometric renders.
Please remove this notice once you've added suitable isometric renders to the article.
The specific instructions are: Web render
Spider 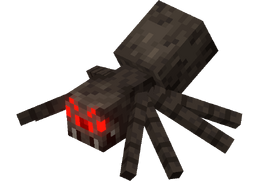 Spiders are common hostile mobs found in certain levels in Minecraft Dungeons that have the ability to shoot webs to slow players.

Spiders in Minecraft Dungeons look like their counterparts in the base game. The key visual difference is that in Dungeons, a spider can raise its abdomen to shoot cobwebs.

Spiders also spawn when night falls, regardless of location, when at least one player dies in multiplayer.

Spiders are hostile towards players and companions. At first, spiders do not attack directly, but they shoot cobwebs that can temporarily leave the player trapped. Spiders flee when an unwebbed player approaches.

If a player gets caught in a web, all nearby spiders will run to attack the player.

Spiders have a sound file named "Call" that they use to call other spiders. This sometimes happens when a spider sees a player suddenly and gets scared. The spider would tighten its legs and jump a little bit. (Like arthropod animals in real life). 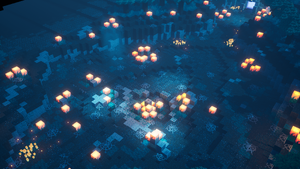 The arena where the Abominable Weaver is summoned and battled at.

The Abominable Weaver is the ancient variant of the Spider encountered during Ancient Hunts with the minimum offering of . The ancient resides within a Spider Cave-themed arena and possesses, at minimum, the following enchantments:

Upon defeating the Abominable Weaver, a gilded variant of the Double Axe, Wolf Armor, Battle Robe, Trickbow or any of their uniques will drop as a reward.