This article is a work in progress.
Please help in the expansion or creation of this article by expanding or improving it. The talk page may contain suggestions.
Note: Add sounds for the Bat.
Spelunker Armor 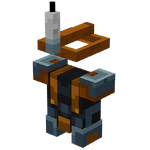 The spelunker armor is an armor found in Minecraft Dungeons that can be equipped for increased protection. When equipped, a pet bat is summoned, which follows the hero around and attacks enemies. Its unique variants are the cave crawler and the sweet tooth.

A bat is a flying pet that follows those who equip the spelunker armor. Despite being small and weak, bats can distract enemies.

Rare spelunker armor with a power of 44 provides a pet bat that deals 50 damage per attack.

Bats can also be summoned by the mystery armor with the Gives you a pet bat property.

The bat in Minecraft Dungeons looks similar to its base game appearance with the difference of having lighter brown fur and dark areas on its belly and neck. It also has a smaller mouth.

Unlike its base game variant, bats attack any mobs within the vicinity and are able to take significant damage before dying, unlike base game bats that die easily when hit.