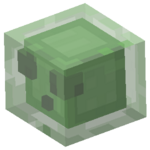 A slime is a hostile natural mob that can be found within various missions of Minecraft Dungeons.

Slimes bounce towards heroes once seen and try to ram into them to damage them. Unlike normal slimes from Minecraft, when they get killed, sometimes they immediately split into small slimes instead of medium slimes. There also is a chance for a large slime to die without splitting. Additionally, small slimes actually deal damage to the hero.

The oozing menace is an ancient small slime encountered during ancient hunts with the minimum offering of the following runes:

The ancient resides within a Soggy Swamp-themed arena and possesses, at minimum, the following enchantments:

Upon defeating the oozing menace, a gilded variant of the following items will drop as a reward:

Issues relating to "Slime" are maintained on the bug tracker. Report issues there.