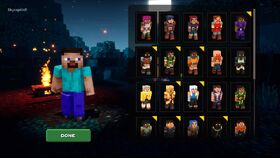 Skins refer to the textures for a player's character. Players need to choose a skin fit for a hero before they begin their quest. There are many options available. There are four skins that are deemed the four strongest heroes. Unlike in Minecraft, no custom skins can be brought into the game without using third party game mods.

For the skins in Minecraft Dungeons, the player model with an arm thickness of 3 pixels is used.