This article is a work in progress.
Please help in the expansion or creation of this article by expanding or improving it. The talk page may contain suggestions.
Note:
Skeleton Vanguard 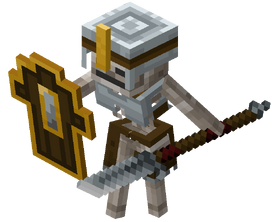 A skeleton vanguard (referred simply as the vanguard in-game) is an armored variant of the skeleton and is an undead hostile mob found in Minecraft Dungeons. It also wears the vanguard armor which is exclusively worn by them.

Skeleton vanguards are a desert variant of the skeleton that are the protectors of the Desert Temple and the bodyguards of the Nameless One. They are seen wearing an iron chestplate, a leather belt around its waist, and an iron helmet with a brown stripe near the base and a gold stud in the middle. It wields a unique-shaped shield that's made of wood and has golden sides with an iron patch on the middle. It is also seen wielding a glaive, which it uses for attacks.

The Skeleton Vanguard has two behaviors.

A skeleton vanguard immediately chases the hero once seen or alerted by another mob.

When close enough, it stabs the target with its glaive. The shield serves as extra health as it absorbs the first attack. The skeleton vanguard has a longer attack reach than most other mobs, so it can hit targets from farther away. Their long attack reach also allows them to take down allies more easily, such as wolves, who can't touch them because of this glaive.

The Vanguard Armor is an unobtainable set of armor worn exclusively by Skeleton Vanguards.

A Desert Shield is an unobtainable shield equipped exclusively by Skeleton Vanguards.

The Cursed Presence is the ancient variant of the skeleton vanguard encountered during Ancient Hunts with the minimum offering of the following runes:

The ancient resides within a Lower Temple-themed arena and possesses, at minimum, the following enchantments:

Upon defeating the Cursed Presence, a gilded variant of the following items will drop as a reward:

Issues relating to "Skeleton Vanguard" are maintained on the bug tracker. Report issues there.