Edit
For the mob in Minecraft, see Shulker.

This article is a work in progress.
Please help in the expansion or creation of this article by expanding or improving it. The talk page may contain suggestions.
Note: Sounds

This page describes content that is a part of the Echoing Void DLC.
Shulker 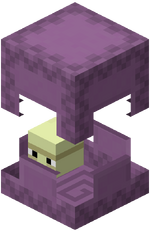 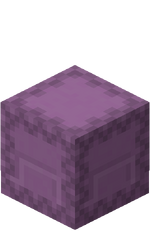 A Shulker is a hostile mob found in the Echoing Void. It appears similar to its Minecraft counterpart.

Shulkers, like their base counterpart, can shoot shulker bullets at the hero, which deal damage and also inflict a Levitation effect. They can close their shell, which makes them take less damage. If shot by an arrow when it’s shell is closed, the arrow is reflected but only if shulker is enchanted with Deflect, otherwise they take less damage.

If shulker is related with nearby door they can respawn after killed, like mobs before 1.8.0.0 version.

A Shulker Bullet is a projectile that is shot from shulkers which not only deal damage, but can activate certain contraptions for the hero to access areas. The bullets can inflict a Levitation effect upon contact. Shulker bullets also follow the hero unless destroyed by an arrow, or it breaks by itself after a while. Unlike most other projectiles shot by mobs, the shulker bullets can also hit and effect other mobs with levitation.