This article is a work in progress.
Please help in the expansion or creation of this article by expanding or improving it. The talk page may contain suggestions.
Sheep 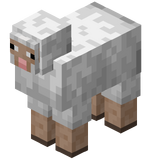 A sheep is a passive mob that can be found in most missions in in Minecraft Dungeons.

Issues relating to "Sheep" are maintained on the bug tracker. Report issues there.