This article is a work in progress.
Please help in the expansion or creation of this article by expanding or improving it. The talk page may contain suggestions.
Shadow brew 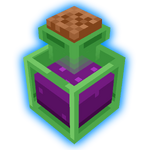 A shadow brew is a potion that can be found within the various missions of Minecraft Dungeons.

Shadow brews are obtainable by defeating mobs, and opening chests.

The surprise gift armor enchantment and the looting weapon enchantment also have a chance to create the potion, as well as other consumables.

Witches often throw potions identical to shadow brews. However, these potions create a purple cloud that does continuous damage more like the poison cloud enchantment than actual shadow brews.

Shadow brews grant the hero invisibility and increased damage on the next melee attack when consumed, which are combined into the shadow form effect. Shadow form lasts for ten seconds and ends after hitting an enemy or when the duration runs out.

The shadow form is an effect that can be found exclusively by consuming shadow brews within the various missions of Minecraft Dungeons.

The shadow form grants invisibility, which causes nearby mobs to not be aggressive towards the hero, and also makes the hero transparent, while leaving armor and weapons fully visible. Taking off equipment beforehand has no additional benefit.

Next attack does increased damage.