This page describes content that is a part of the Howling Peaks DLC.
Scatter Mines 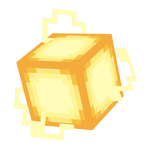 Scatter Mines is an artifact in Minecraft Dungeons.

Using the Scatter Mines places three proximity mines on the ground, which explode when an enemy is within range. They appear and behave very similarly to the mines created by the Redstone Golem. This artifact has 12 seconds cooldown and if they aren't triggered by anything, the mines will automatically explode after 10 seconds.