This page describes content that is a part of the Howling Peaks DLC.

This article is a work in progress.
Please help in the expansion or creation of this article by expanding or improving it. The talk page may contain suggestions.
Satchel of Elements 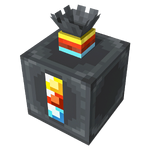 The Satchel of Elements has the ability to target 7 mobs at once and strikes them with a random elemental status: either struck by lightning, frozen, or set ablaze. This artifact has a 10 second cooldown.