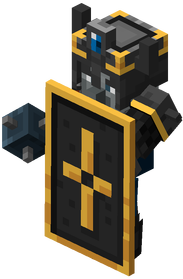 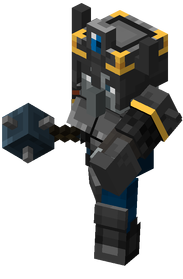 A royal guard is a heavily-armored illager that wields a shield and a mace found in Minecraft Dungeons. The royal guards are the highest ranking guards of the Arch-Illager and they protect him at all costs. A variant of the royal guard, the tower guard exists in certain floors of the tower.

Royal guard are illagers wearing dark armor with yellow outlines on the helmet and sleeves, and with a sapphire gem. They carry shields that have a yellow cross-like pattern, in addition to maces.

Royal guards are one of the strongest illagers in the Arch-Illager’s army, capable of overwhelming the hero with both damage and numbers.

Royal guards are usually protected by their heavy armor and their shield and mace. The shield should be destroyed first, so the hero can damage it. Royal guards are slower than most mobs, but extremely strong, capable of dealing heavy damage to the hero. Their health pool is larger than the gold armored vindicator and they do more melee damage. They still can be stunned by normal attack.

In this sense, they are the illager equivalent of skeleton vanguards, except they use maces instead of glaives.

They have three behaviors:

If a royal guard is in range it charges at the hero.

Royal guards are capable of swinging their mace at the hero, dealing heavy damage. However they cannot move when attacking as regular vindicator.

If the hero runs 15 blocks away from a royal guard, it locks onto them and chases after them, ignoring other heroes.[verify]

A royal guard shield is an unobtainable shield equipped exclusively by royal guards.

The royal guard shields are dark gray with a golden outline. There is a golden cross on the center of the shield with a dark gray square in the middle.

This page would benefit from the addition of more sounds.
Please remove this notice once you've added suitable sounds to the article.
The specific instructions are: Death sound with armor sound

The vigilant scoundrel is the ancient variant of the royal guard encountered during Ancient Hunts with the minimum offering of the following runes:

The ancient resides within a Highblock Halls interior-themed arena and possesses, at minimum, the following enchantments:

Upon defeating the vigilant scoundrel, a gilded variant of the following items will drop as a reward:

Issues relating to "Royal Guard" are maintained on the bug tracker. Report issues there.