This page describes content that is a part of the Howling Peaks DLC.
Resolute tempest knife 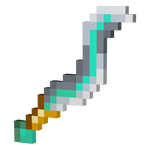 The item description states that nomads roam the mountain peaks, passing down the resolute tempest knife to be used in countless battles.

The resolute tempest knife possesses moderate power, moderate speed, and low area. It has a combo consisting of a thrust and two side slashes. The first two hits deal the weapon's minimum melee damage, while the third, the second slash, deals the maximum melee damage.