Edit
Not to be confused with Redstone Golem or Mooshroom Monstrosity.
See also: MCD:Obsidian Monstrosity

This article is a work in progress.
Please help in the expansion or creation of this article by expanding or improving it. The talk page may contain suggestions.
Note:
Redstone Monstrosity 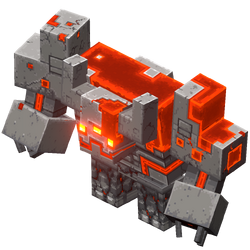 The Redstone Monstrosity is the boss variant of the redstone golem. It appears in the Fiery Forge as the final boss, summoned by the Arch-Illager as a last resort to protect the forge after the heroes overloaded all of the redstone cores to destroy the weapons factory.

The redstone monstrosity appears to be a hulking, mechanical entity made of stone and redstone patches. It has multiple cracks within its body and red outlines within its torso. It has three glowing yellow eyes with the third one on its forehead and a red jaw. It possesses two large horns on its head. The mooshroom monstrosity and redstone golem are variants of this entity. It is about 5.4 blocks tall (7.2 blocks tall in the 1.6.0.0 trailer update).

The redstone monstrosity has three attacks. While not attacking, it slowly walks toward its target. It is the second slowest mob in the game, after the jungle abomination.

The redstone monstrosity has an unused awaken sequence.

The redstone monstrosity smashes both of its fists on the ground, creating a large four-block shockwave that deals knockback and deals very heavy damage to any entities in its radius. This attack is the one used most often when it’s target gets in range.

The redstone monstrosity leans back and spits out 8 small fireballs from its mouth. When a fireball touches the ground, it explodes in a small radius and deals massive damage to the hero. This attack is used mostly when there are no heroes in melee reach, and is more powerful than its melee attack (30%x8=240% range total damage vs 100% melee damage). The explosion damage is not affected by the totem of shielding.

The redstone monstrosity touches the ground with both fists as the redstone on its body glows.

Twelve fissures form around the boss, each spawning a redstone cube that attacks nearby targets. This attack occurs every twenty seconds. Sometimes the monstrosity performs this attack, but no redstone cubes are summoned.

This article is about the hostile mob in Minecraft Dungeons. For the block in Minecraft, see Block of Redstone.
Redstone Cube

A redstone cube is a hostile mob found in Minecraft Dungeons. They are one of three Redstone-themed mobs, the others being the redstone golem and the Redstone Monstrosity.

The redstone cube appears to be a Block of Redstone with stone patches and eyes with eyebrows. Its eyes look almost identical to the ones found on the redstone golem. It leaves a small trail of redstone dust as it moves.

The redstone cube relentlessly chases a hero by rolling towards them, dealing damage upon contact.

This page would benefit from the addition of more sounds.
Please remove this notice once you've added suitable sounds to the article.
The specific instructions are: Smash attack sounds