This page describes content that is a part of the Howling Peaks DLC.

This page would benefit from the addition of isometric renders.
Please remove this notice once you've added suitable isometric renders to the article.
The specific instructions are: Ravager Roar
For hostile mob in Minecraft, see Ravager.
Ravager 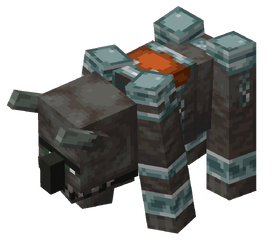 A Ravager is a large Illager-like hostile mob found in the Minecraft Dungeons DLC Howling Peaks.

Ravagers have three different behaviors. They can't be stunned by normal attacks, except Shock Powder and any weapon with the Stunning enchantment.

The Ravager rams the target with its head, dealing a lot of damage and knocking them back.

After pawing the ground with its legs, the Ravager will very quickly run towards the target and bite them. This attack does even more damage than the regular bite. As of the Hidden Depths update, this attack no longer deals any damage.

Occasionally, the Ravager will roar violently, knocking away any nearby mobs or heroes a great distance but won't deal any damage.

Issues relating to "Ravager" are maintained on the bug tracker. Report issues there.