It has been suggested that this page be merged with MCD:Armored Vindicator. [discuss]
If this merge affects many pages or may potentially be controversial, do not merge the page until a consensus is reached.

It has been suggested that this page be merged with MCD:Armored Pillager. [discuss]
If this merge affects many pages or may potentially be controversial, do not merge the page until a consensus is reached.
This article is about the new mini boss that appears randomly in locations. For the illager mob that controls the Colossal Rampart, see MCD:Rampart Captain. For the Illager captain of the patrol or raid in the original game, see Raid captain.

This page would benefit from the addition of isometric renders.
Please remove this notice once you've added suitable isometric renders to the article.
The specific instructions are:
Raid Captain

Raid captains behave like normal illagers, attacking with its axe,[2] or shooting the hero with its crossbow. However, they deal increased damage and knockback. Raid captains can spawn only within missions that have already been completed once. Depending on the situation, there can be one to six raid captains in missions. They spawn with a group of illagers or illager allies around them, such as vindicators, armored vindicators, geomancers, pillagers, armored pillagers, mountaineers, armored mountaineers, wind callers, enchanters, royal guards, iceologers, and witches or alone, like in the patrols of the base game.

Although a "taunt circle" harms normal vindicators while making them more aggressive, it has no effect on vindicator raid captains.

When defeated, a raid captain drops one of two banners, either threat or mystery. Threat portrays the Bad Omen icon and mystery portrays a skull, and when picked up, the game is enhanced with modifiers (for example, enemies have boost). At the end of the level, an extra item is given in addition to the artifact chest. Also, the chance for it to be unique exponentially increases for every raid captain defeated after the first.

If all six raid captains have been defeated inside of a daily trial on Apocalypse + 25, the highest power level items in the game can be collected from the raid captain chest. 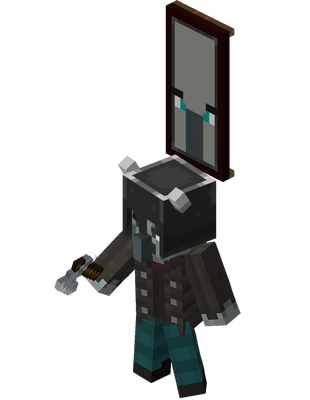