This article is a work in progress.
Please help in the creation of this article by expanding or improving it. The talk page may contain suggestions.
Pink Slime 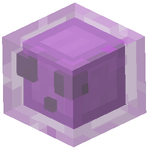 Pink Slimes are slime variants that can be summoned by the Corrupted Cauldron found in Minecraft Dungeons.

Pink Slimes are a medium-sized and pink variant of the Slime which can only be found summoned by the Corrupted Cauldron. It has dark purple eyes and mouth, a purple inner core, and a light purple outer layer.

Pink Slimes can be summoned by the Corrupted Cauldron during the boss fight to try and distract the player while it tries to heal itself in Soggy Swamp.

Once summoned, Pink Slimes attack the player on-sight by shooting purple projectiles that deal moderate damage upon being hit. Unlike the normal slime, it is immobile, where it prefers to stay in one spot during the boss battle and attacking the player from a distance. They don't have a jump behavior unlike normal slimes.

Issues relating to "Pink Slime" are maintained on the bug tracker. Report issues there.