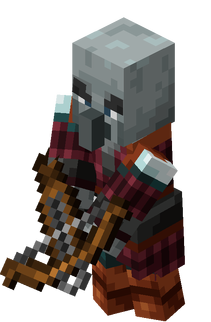 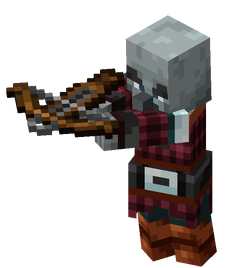 A pillager is an illager and hostile mob equipped with a crossbow found in many missions in Minecraft Dungeons.

The pillager's appearance in Minecraft Dungeons is similar to its regular, default version, except it bears blue eyes instead of the usual green ones it has in the base game.

A pillager's crossbow always have the Piercing enchantment, which goes for its armored variant as well.

Similar to skeletons, spiders, and geomancers, pillagers move away to keep distance from the hero.

Pillagers are armed with crossbows and are usually slow-moving, preferring to shoot the hero from a distance. However, it deals great pierce damage with a single shot.

The solemn giant is the ancient variant of the gold armored pillager encountered during Ancient Hunts.

Issues relating to "Pillager" are maintained on the bug tracker. Report issues there.