From Minecraft Wiki
Jump to: navigation, search
Not to be confused with Piggy Bank.

This article is a work in progress.
Please help in the creation of this article by expanding or improving it. The talk page may contain suggestions.
Pig 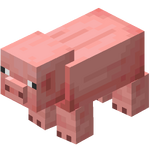 The Pig is an unattackable passive mob that spawns in some levels for decoration.

The Pig's appearance is that of its normal default texture from the base game. They also use the same sounds aside from a unique knee shake sound.

Two Pigs are seen in Camp within their pen, while others spawn in pens in the Highblock Halls and Lone Fortress and in other levels usually outside of the player's view to fit the ambience.

The pig, unlike other mobs, does not seem to interact with players and cannot be attacked, except for a secret area in the Lone Fortress level. The only way to damage them there is by using the Shockwave enchantment or a weapon with a high area such as a Double Axe. They are affected by the Chilling enchantment.

Issues relating to "Pig" are maintained on the bug tracker. Report issues there.