This article is a work in progress.
Please help in the creation of this article by expanding or improving it. The talk page may contain suggestions.
Pickaxe 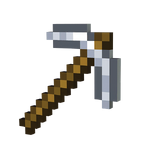 The pickaxe has been the iconic tool of adventurers and heroes for as long as anyone can remember.
— In-game description

The Pickaxe is a melee weapon in Minecraft Dungeons. Its only unique variant is the Diamond Pickaxe. It was previously supposed to get another unique variant called The Monkey Motivator, but never made it into the game.

The Pickaxe has moderate power and low speed and range, and attacks with an overhead strike. The pickaxe can be a part of the current most powerful build. Thanks to its quick attack speed and single hit combo, as long as you are using the right enchantments (Shockwave, Swirling, Gravity or radiance).