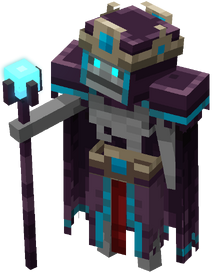 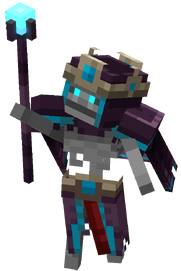 A necromancer, also known as a summoner, is a powerful undead hostile mob found in Minecraft Dungeons that can summon undead mobs. They look similar to the Nameless One but are slightly smaller, about 2.5 blocks tall, and wear a purple robe with blue markings.

A necromancer is a large skeleton that wears blue turfs, a cape with blue stripes near the end, a golden belt with a blue gem in the middle, has greenish eyes, and wears a gold crown-like headwear. Necromancers always hold a staff with a blue orb placed upon a stick.

Necromancers use their staff to summon zombies and armored zombies to attack heroes. They summon mobs much more often than the Nameless One. Should the hero get too close, the necromancer immediately flees until they are a safe distance from the hero, and then summon mobs again.

Haunted Caller is the ancient variant of a necromancer encountered during Ancient Hunts with the minimum offering of the following runes:

The ancient resides within a Creepy Crypt-themed arena and possesses, at minimum, the following enchantments:

Upon defeating the Haunted Caller, a gilded variant of the following items will drop as a reward:

This page would benefit from the addition of more sounds.
Please remove this notice once you've added suitable sounds to the article.
The specific instructions are: when necromancer orb impacts the player