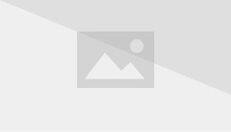 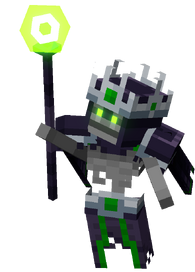 The Nameless One, also known as the Nameless King, is a boss mob found within Minecraft Dungeons.

The Nameless One is a large skeleton. It wears a crown of some unknown material over a robe and a belt. It has glowing dark green eyes and has robes with green translucent smoke coming out from underneath it, as it has no legs. Its ribs go over a robe which is remarkably similar to that of a witch. It wields a staff that allows it to summon the skeleton vanguards. It was originally the ruler of an ancient civilization of necromancers.

In Rise of the Arch-Illager, when Archie is leading the illagers to the village, he decides to take a wide arc around the desert temple. Unknown to Archie, despite this, the Nameless One knows of the abilities of the Orb of Dominance and sends husks and skeletons to follow the illagers under the cover of darkness. After the illagers launch their raid on the village and Archie is confronted by Yumi, the undead army appears. They launch their own raid, attacking illagers, villagers, and heroes alike. Archie is shot twice by two skeletons and falls unconscious. Archie wakes up in the midst of being carried to the desert temple and the leading necromancer knocks him out with its staff. He wakes in a prison cell held by a different necromancer who leads him captive to the throne room. In the throne room, Archie meets the Nameless One in person. The Nameless One makes it clear that it desires the Orb of Dominance to make it’s army immune to sunlight. Archie makes it clear that he won't part with the Orb of Dominance. With both of them trying to gain the upper hand in the tense conversation, they eventually come to an agreement: Archie can use the Orb of Dominance to make the undead immune to the sunlight and the Nameless One will allow Archie to command the undead army.

The nameless one has five behaviors.

When the hero first initiates the boss fight, the Nameless One slowly rises from it’s tomb-like throne, opening its eyes.

The nameless one fires large, slow-moving green projectiles towards it’s target current location. Deals heavy damage if it hits. This is its most common attack.

After a charging animation, the nameless one summons a wall of seven skeleton vanguards between itself and the hero. Used more sparsely.

If there are at least three, both the nameless one and its false kings teleport to form a circle around the hero and continually fire energy blasts at them. The false kings instantly disappear if they are attacked by something. This is its most powerful attack.

When not attacking, it teleports away from the hero and hovers in one spot. But when the hero attacks it first, then it attacks.

A false king is a mirror image of the nameless one that are summoned to confuse the hero similarly to the illusioner’s behavior within the Creeping Winter DLC.

They often teleport in a ring formation around the hero and fire one green projectile at them, before disappearing. It is not possible to attack these false kings.