This article is a work in progress.
Please help in the creation of this article by expanding or improving it. The talk page may contain suggestions.
Mystery Armor 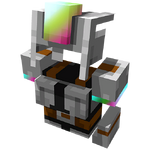 The Mystery Armor is armor in Minecraft Dungeons. Most armors come with 2 to 3 standardized proprieties, however, the Mystery Armor comes with two or three completely random properties. The color of the gem atop the helmet and end of the sleeve is also a random matching color. It is also one of the only non-artifact item in the game with no unique variant, the other being the Guard's Armor.

Mystery Armor, when obtained, randomly selects two properties from the list of known properties below. Occasionally it can have a third random property.