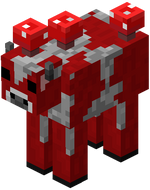 A mooshroom is a hostile cow variant that can be found within the secret ??? mission of Minecraft Dungeons.

Moshrooms look exactly as they do within the original Minecraft game, with a red body that has white spots in it. They have horns at the sides of their heads, and black eyes. The only difference, however, is that the red mushrooms and horns on their back and head are a 3D model, rather than a 2D model within the original game.

Mooshrooms are hostile and attack heroes in herds, dealing damage, unlike the original game. They are more bulky and defensive than other mobs, requiring many hits to defeat them. Mooshrooms have two behaviors.

Mooshrooms commonly attack by kicking against the hero with their front legs.

Mooshrooms occasionally perform a rare attack where they ram the hero with their horns.

The ????? is an ancient mooshroom that can be encountered during ancient hunts with the minimum offering of the following runes:

The ancient resides within a ???-themed arena and possesses, at minimum, the following enchantments:

Upon defeating the ?????, a gilded variant of the following items drops as a reward:

Mooshrooms use both old and new cow sounds.