This article is a work in progress.
Please help in the expansion or creation of this article by expanding or improving it. The talk page may contain suggestions.
Note:
Mob Spawner 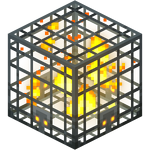 A mob spawner is a hostile monster factory mob that spawns zombies in Minecraft Dungeons. It has a variant in the Flames of the Nether that spawns blazes.

Mob spawners behave in a similar vein to the spawners in the main game, but light doesn't affect the spawn rate. It produces a crackling sound while idling. They have possibly the highest health of any regular mob. They can also spawn enchanted with any melee enchantment as any other melee mob. But, they can also have ranged enchantments. Both of these are useless, as mob spawners don't actually do damage to the hero. However, defensive enchantments still work. Even though the Spawner itself does not move, the Gravity enchantment can cause it to (except Nintendo Switch version[needs testing]).

Mobs are produced in huge waves whenever the hero is within a certain distance from it. Mob spawners can currently spawn two mobs: zombies and armored zombies.