This article is a work in progress.
Please help in the expansion or creation of this article by expanding or improving it. The talk page may contain suggestions.
Mission Select 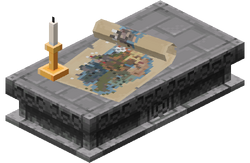 The mission select table, is an object where heroes can select a mission by using the map.

It can be found in the north part of the camp located next to the Village Merchant, Blacksmith and Gift Wrapper. It can also be accessed by pressing the "Map" button (Default M/D-pad Down) while inside the camp. It opens up when you hover your cursor over it. It first appears once you complete Squid Coast and is vital for progressing throughout the rest of the game's story. The map accessible in Minecraft Dungeons is an interface used to travel to all the missions. shows which missions have been completed or have not been attempted. By clicking on a mission, heroes can view the level of difficulty, weapon drops, and artifacts that may be obtained.

The map has three different sections: the Mainland section; the area where the base game's story of the Arch-Illager's downfall takes place. The Island Realms section; the main area in which the first three DLC packs, as well as the fifth, take place. This area contains four islands: Jungle Awakens, Creeping Winter, Howling Peaks, and Hidden Depths. Finally, the Other Dimensions section; the area in which DLC packs themed outside the Overworld take place. This area contains locations outside of the Overworld, The Nether and The End. It also has the option to start an Ancient Hunt. The Mainland section has a total of 17 accessible missions, the Island Realms section has a total of thirteen accessible missions, and the Other Dimensions section has a total of eight accessible missions. The Mainland section can be accessed by any player’s hero (excluding The Stronghold), whereas the Island Realms (excluding the Gauntlet of Gales) and Other Dimensions sections can be viewed, but require the purchase of DLC packs in order to access their locations, with the exception of the Ancient Hunt button.

Missions can be travelled to from the map once heroes have reached or returned to the Camp. They do not appear on the map until they are unlocked. Due to the nature of how the missions are unlocked, it is entirely possible to skip missions to complete the main story. There are a maximum of forty five (not including Camp or Squid Coast) playable missions at any given time if all of the secret missions, Daily Trials, and DLCs are available. Each missions contains over 500 mobs (excluding the Squid Coast, which has less than 100 mobs)

There are three main things that can be found in a missions: Consumables, Emeralds, Armor, Artifacts, and Weapons.

Ancient Hunts can be accessed by way of the ancient hunt icon with an enderman face on the Other Dimensions map or through the Nether portal located within the Nether Cave.

Some unused missions can be found within the game files. Information about these missions is scant.

These missions may have been available in the game or the files at one point, but removed in a later update.