This article is a work in progress.
Please help in the expansion or creation of this article by expanding or improving it. The talk page may contain suggestions.
Note:
Lower Temple 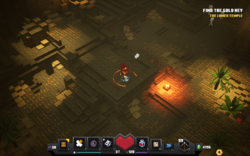 The Lower Temple is a secret location in Minecraft Dungeons. It is the lower extension of the Desert Temple.

The Lower Temple takes place beneath the main Desert Temple. It's an area full of skeletons, wraiths, and necromancers. There are also similar traps from the upper temple. After exploring the maze-like corridors, loot will be rewarded for solving puzzles. Once finished, a key golem is required in order to escape. Many chests can be found along the way. Two new items can be found here: the Battlestaff and the Dual Crossbows, both of which were exclusive to the Lower Temple prior to the Howling Peaks DLC.

To unlock it, the hero must travel through the Desert Temple on any difficulty until they reach the cross way of water (just after the gold key and gate). The hero must go up and to the left into the side room, inside of the room there are four branching paths and an inaccessible platform. Then, they must explore each short path and power the beacons found on each path. There will only be three, however they will be in randomized locations each time. Once all the beacons are powered, the hero must proceed across the bridge and take the scroll on the pedestal (where the gold chest used to spawn). The hero may either return to camp or finish the mission. Upon visiting the map, the Lower Temple will be accessible but the hero can get it for free because of the new update.

As said by the name itself, the Lower Temple is the lower, unseen section of the Desert Temple accessible via a secret doorway. The place is overall similar to the upper section containing various traps, maze-like corridors, hordes of undead mobs, and small pools and fountain systems, as well as a more 'ruined' look. The only way of exiting the Lower Temple is via a Key Golem to activate the gate leading outside.