Edit
This article is about the Minecraft Dungeons artifact. For the new 1.17 block, see Lightning Rod.
Lightning Rod 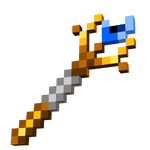 A lightning rod is an artifact in Minecraft Dungeons that when activated, a bolt of lightning strikes an area around the hero after a short delay.

When used, lightning rods shoot lightning on a nearby mob, damaging it and the mobs around it.

Lightning rods have a two second cooldown, +1 soul gathering, and requires fifteen souls to activate. Equipment that increases Artifact Damage, such as the Souldancer Robe, Splendid Robe, and Cave Crawler affect the amount of damage dealt.

The damage range depends on the item's power.