This page describes content that is a part of the Jungle Awakens DLC.
Jungle Abomination 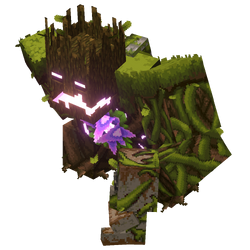 The jungle abomination is a boss mob found in Minecraft Dungeons. It is the final boss of the Jungle Awakens DLC.

The jungle abomination appears to be an overgrown monstrosity composed of logs, dirt and stone, and has moss and vines growing on it. Its left arm has what appears to be a villager statue on the end, bound by its vines, and its right arm is a vine. It has glowing eyes similar to that of an enderman, as well as its mouth and a large flower on its torso where the shard is located. It is 7.2 blocks tall.

After taking significant damage, the boss may become stunned and vulnerable for five seconds, with its defense significantly reduced by 60% and it not moving or attacking.

The jungle abomination summons two to four whisperers. When below half health, it can also summon two leapleaves.

This attack involves the jungle abomination whipping its vine-like right arm into the ground and four to ten abomination vines rise from the ground to attack the hero. This attack seems to be used when the abomination falls below half health and deals 40% of the melee's smash per vine.

If the target is not close enough to the jungle abomination that it can use it’s melee attack, it can shoot out two circles of twelve poison darts from itself that inflict the poison effect on hit. At lower health values, it may combine this attack with the vine attack.

An abomination vine is an entity summoned by the jungle abomination when it uses the vine attack.

It is a vine-like mob, and looks like it is made of wood and plants.

These vines behave similar to the quick growing vines, but they are immune to all forms of damage and can do contact damage to the hero when they sprout up. The jungle abomination usually summons about 8 of these scattered in a large circle around itself, but can do a few other patterns such as just four of them in a small square around itself. They sink back down into the ground after a few seconds. Despite being invincible, they can still be stunned by heroes using the snowball or stunning enchantments, although it has no effect.